As the title says, the Sabbat (or Festival) or Imbolc approaches, Feb 2nd is the traditional day to celebrate, traditionally it is a festival of returning light, the fires of Brighid are kept alight for the full day, the symbolism of the first Lamb's being born, an agricultural festival of the first births of the animals for the coming year, the Ewe's are 'in milk', hence the origin of its name.

And yet, although the first buds are appearing on the trees (or have been for the past 4 weeks), it doesn't feel like mid winter, it still feels autumnal, the weather feels strange, milder than it should be, a lot wetter than normal, stirrings are apparent in the countryside, the dawn chorus is louder than it has been, but for me it still feels as though we are yet to experience Winter, the Holly King may have been defeated, but he still has some power left. I would not be surprised to see snow before winter is truly out, my feelings tell me it will come, but whether it does or not I am sure only time will tell!

So, if you choose to Celebrate Imbolc, then I wish you well, may the light of the fires of Brighid warm your homes, may your first Lamb's be born healthy and may the seeds of the coming year's harvest receive good portents.

For me, I'm afraid Imbolc will be celebrated when it feels right, I know this isn't an accepted 'Neo Pagan' view, but my path is a Crooked One, where I walk as directed by the Old Ones, listening to and feeling the energies of the land and responding in the manner that feels right, if this means I am out of step with other Pagan's, then so be it, I am not one to follow the herd, but one who walks her own path, alongside those who also feel the same pull and honour the Old Ones in a similar manner.
Posted by Mrs Dobby at 10:07

speaking as one of the Old ones all the blessing of the coming year to you and Mr D ... Hope you are both well ...I stumbleed on your page and thought I recognised you :)

Weaving a web of Light and Dark....

Greetings and Welcome to my third Blog, and possibly the one that will mean the most to me personally! I've been blogging as a photographer and Allotment Gardener for several years now, but although I have been a practicing Witch (of the British Traditional Variety) for the past 10 years plus, I have not recently shared any of my writings, nor had much involvement within the Pagan Community! However, I have recently found myself 'pushed' by the Lady to resume my writings and musings, to become more creative than I have been since the time I wrote the original SilverWolf's Lair website (that I crafted 10 years ago - still available via web archives, see the links list below) and which was taken down when ntlworld decided to discontinue that domain name.

My name is Suzanne, I'm in my 40's, started to walk my Crooked Path in my early 30's (although have always walked a pathway that was akin to my current one, just I never knew its name), firstly through a Wiccan framework, then moving on from their into a more British Traditional Witchcraft basis, training along the way with 2 family groups and a local Coven, before finding myself drawn to other aspects of the Craft, including a delving into the writings of Robert Cochrane and an ongoing interest in Druidry and some of the more Shamanistic aspects of the Craft.

I enjoy a good connection with the Land herabouts, working 2 allotments with my soulmate, fellow practioner and husband Lee, where we also keep 6 hives of honeybees (along with help from a couple of friends). We are fortunate to live not too far from the Old Working Area of Alderley Edge, a mysterious place with a long history of habitation and links to the Craft in one facet or another, which is a place that we sometimes use for our workings.

Our focus is now very balanced, we place neither the Goddess or God above each other, although do concede that without the Mother non of us would be, for it is she from which all flows. We are neither solely light or dark focussed in our practices, but balanced, you cannot heal if you do not know how to harm, but knowing when to do either and what price you will be asked to pay is where the Wisdom of the Witch lies!

I welcome you to my writings and musings, I appreciate honest and open debate and will always reply when possible, you are welcome to copy and share any writings from the site, as long as credit and a link back here is given. 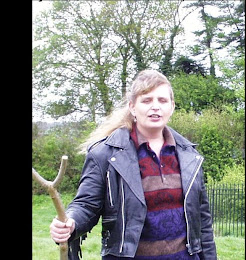 Mrs Dobby
I'm a 40 something yr old woman, married to a great guy, Lee, for the past 12 years, am a practicing Pagan Witch, and enjoy life to its fullest extent! Currently we are both enjoying growing our own veg (on our 2 organic allotments), looking after our 6 colonies of apis melifora (honey bee) and practicing my photography (on my ebay special Canon EOS10D) I work as a store manager for a finance provider, and enjoy reading, writing, cooking, camping and many other things besides! We are both passionate dog owners with many years of experience of providing a loving friendly home to our furbabies.